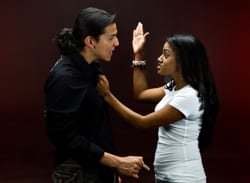 The State of California considers domestic violence a serious problem. In the past, the police would not arrest a man or a woman in a domestic dispute in the absence of clear evidence of serious abuse. Now, police action at domestic violence calls is dictated by a strict agenda which requires the police to arrest a husband/wife or boyfriend/girlfriend, if one or the other has any visible injury on them.

The police take very brief statements and with almost no real deliberation, decide that the injured person is the victim and the non-injured person is a suspected domestic abuser. This can result in the aggressive pursuit of a domestic violence case even when the evidence is scanty. Sometimes, a domestic abuse charge is used as leverage in a divorce or child custody case or as a malicious means to settle a score between jilted lovers. A domestic violence conviction can have serious consequences, however. A judgment of conviction for domestic violence usually requires a mandatory one-year class, an order to stay away from the victim, and weapons restrictions. It can also affect a divorce or child custody case. For a free and confidential consultation about a domestic violence charge, please call Alanna D. Coopersmith at (510) 628-0596.