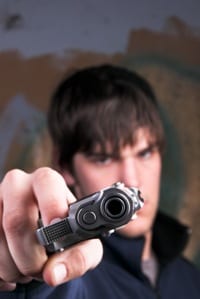 Conviction of a firearm crim can have substantial criminal consequences. It is unlawful to carry a loaded firearm. It is also unlawful to carry a firearm which is concealed on your person or in your car. Despite popular belief, carrying a firearm in either of these manners can be a criminal offense, even if you have a license to own the gun.

A firearm offense may be charged as a misdemeanor or felony depending on the facts. Because the sentencing scheme is complicated, it is important to consult with a competent attorney to determine whether the DA has even charged you correctly, and to understand the possible punishment. In addition to the fact that firearm possession can be criminal in its own right, the use of a firearm in the commission of another crime increases the punishment – often greatly.

There are a number of possible defenses to gun and weapon charges. Legal issues could include whether the weapon was a firearm, whether possession was justified by legal necessity, whether the person knew of the firearm, and whether the police officers searched for and seized the weapon legally. Indeed the law involving weapon possession is changing. In D.C. v. Heller, the United States Supreme Court struck down a D.C. law outlawing the possession of a firearm in the home.

Possession of certain other weapons, including a billy, metal knuckles, slungshot, and pen knife, is also illegal.

If you or someone you know is accused of weapons charges, please contact Alanna D. Coopersmith at (510) 628-0596 for a free consultation.