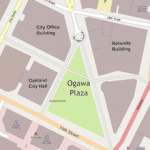 A dozen Occupy Oakland protesters were arraigned on criminal charges following their arrests on Saturday night. At the hearing, the judge imposed a restraining order. What were the defendants restrained from doing? — Going within 300 yards of City Hall.

This pretrial judicial order is both unconstitutional and misguided. It is unconstitutional because it sweeps so broadly that it eliminates a wide swath of core First Amendment activities that have nothing to do with the crimes the defendants were arrested for. The defendants are prohibited from assembling in or even going near Frank Ogawa Plaza, which includes City Hall, government buildings, and City Hall park. It is also unconstitutional because the individuals subject to it are innocent until proven guilty. And, while judges may craft a pretrial restraining order in a criminal case, the authority to do so is limited. Beyond this, though, the ruling is misguided and may be a disaster in terms of public relations. The protesters are railing against erosion of democracy and degradation of human rights. The decision of an elite judge to ban them from participating in the public square only proves their point.