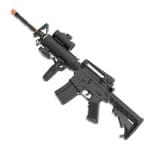 The complicated web of laws in California banning “assault weapons” can leave well-intentioned and law-abiding gun owners scratching their heads. First, the law provides a list of assault rifles by make and model. Then, it provides a catchall definition which makes it illegal to have any semiautomatic rifle capable of accepting a detachable magazine and one of specified other characteristics – among them “a pistol grip that protrudes conspicuously beneath the action of the weapon,” “a forward pistol grip,” and “thumbhole stock.” In other words, a gun that is not listed by make and model as a prohibited firearm may still be illegal. As the California Supreme Court found in a case that required some kind of awareness that a gun possessed characteristics that made it an illegal assault weapon before a gun user or owner can be convicted of a felony, semiautomatic rifles are sometimes used in hunting and target shooting and that a particular semiautomatic rifle is regulated as an assault weapon “may not be readily apparent.”

Well, State Senator Leland Yee has just proposed legislation that would make the gun control laws even tougher. A detachable magazine – a magazine that can swiftly be loaded with additional rounds – is one element of an assault weapon. A ‘detachable magazine’ is defined as an ammunition feeding device that can be removed without disassembly of the firearm or the use of a tool. Senator Yee would now propose that semi-automatic rifles containing a bullet button – which require the use of a tool, a bullet, to release the magazine – count as having a detachable magazine and come within the definition of an assault weapon.

I don’t have an opinion on the wisdom of this amendment to the gun laws. Senator Yee would argue that a bullet button ban simply closes a loophole that allowed gun manufacturers to sell semiautomatic rifles with readily detachable magazines in California. A video of how the bullet button works is here. But I caution against gun control laws that are so complex and technical that unsuspecting hunters and sporting enthusiasts could be deemed criminals. Here, for example, semi-automatic firearms that owners took the trouble to fit with bullet buttons precisely in order to comply with the law would suddenly be prohibited. Meanwhile, actual criminals, those who commit gang violence and robberies, can get their weapons over the black market from other states anyway. A law that average people can’t understand and that subjects them to a felony conviction if they do not appreciate its ever-changing nuances is unfortunate.