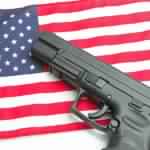 But how far does this right extend? In Heller, the Supreme Court appeared to approve longstanding bans on the possession of firearms by the mentally ill and felons. The court held that a blanket ban on the possession of handguns within the home, and a prohibition on loaded firearms within the home, violated the constitution. Read narrowly, Heller only protects the right to bear firearms within the home. But read broadly, the decision in Heller and its analysis of the Second Amendment may stand for the right to bear firearms anywhere for self defense.

This month, the Supreme Court declined to hear a case that would help to clarify the limits of the Second Amendment. In Drake v. Jerejian, John Drake was employed in restocking ATM machines. Mr. Drake applied for a handgun permit from the State of New Jersey, which denied the permit for ‘lack of justifiable need.’ Mr. Drake argued that the Second Amendment gives him the right to possess a handgun outside of the home for purposes of self defense and that any law which permits state officials to decide whether or not there is ‘justifiable need’ infringes on that that right.

In declining to hear the case Drake v. Jerejian, the Supreme Court shied away from making another precedent-setting firearm rights decision. It will be up to the lower courts for now to wrestle with the scope of the Second Amendment. Sooner or later, the Supreme Court will have to step in.