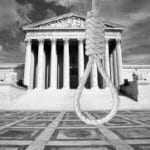 With legislation pending that, if passed, would end the death penalty in California, and the growing chorus of people who question the efficacy of capital punishment now including the Chief Justice on the California Supreme Court, Tani Cantil-Skakauye, my thoughts turn to something that is almost forgotten, the moral argument against the death penalty.

Below is an article I wrote many years ago criticizing the 1995 decision of Governor George Pataki to restore capital punishment in New York. Let me know what you think.

The Billing of Killing

Sadly, one of the few things that New Yorkers can agree upon is New Yorkers who murder other New Yorkers should be murdered themselves. Deluded, and in most cases willfully blind, New Yorkers cast an anti-crime ultimatum that amounts to little more than the banal realization that too many violent acts take place. Rather than question the implications of the death penalty, rather than question whether capital punishment really does reduce violent crime, New Yorkers prefer to take up the knee-jerk reaction that turns our city and our state into murderers.
Does New Yorkers’ support for the death penalty mean that the citizens are dealing more effectively with crime? No, it just means that they are very, very disgusted – so much so that they are willing to take up the practice themselves.

As a whole, New Yorkers were neither for the death penalty nor against it. It was an unimportant  issue. Somehow, voters fond other things to focus on than the readiness of our candidates to execute the poor, the criminal, the sociopathic…

In 1993 all of that changed. Come election time, the atmosphere had grown decidedly conservative. People were alarmed into thinking that the homicide rate had gone up, although it had not. Economic anxieties created an electorate that was eager to find easy solutions, or, better yet, scapegoats.

What better scapegoat than a hardened criminal who supposedly had been through a “revolving door”? The revolving door provided not only an explanation, but a dramatization, of spiraling insecurity.

With indignation against crime at a high point, it is no surprise that quite a few were willing to take to the ultimate affront to civilized society. But in our eagerness to kill, we must ask, aren’t we all becoming killers?
Murder is murder. Whether done at the hands of the state, administered by “trained” technicians, and applied with the queer courtesy of last rites, somebody’s life is taken, and somebody claims the authority to decide. Of course we could gradually acclimate ourselves to a society in which murder at the hands of the state is commonplace, but that would be an insult to us all.

Then again, no insult is too low in Texas. The popular governor Anne Richards ran against George Bush Jr. in a campaign in which she expressed her regret that the pace of executions is too slow. Oh, poor Ms. Richards! Texas is only first in the nation in administering the death penalty, in a country that is one of two industrialized countries alongside South African that administers capital punishment. One county in Texas alone accounts for more executions than the entire state of Florida! – which is not exactly timid about its executions.

Texas has become a veritable breeding grounds for a culture of killing. Individuals who are obviously sadists gather outside penitentiaries to cheer on the death wardens, who are obviously doing the most unlikable jobs. Jokes that circulate on day time talk shows can be discarded; but not without first suppressing a grin. A lawyer who wants to earn a judgeship had better forget about defending individuals accused of capital crimes – or at least defending them vigorously.

In the rooms of the penitentiaries themselves, where the death sentences are carried out, the families of the victims (of the criminals) are invited to avidly watch on. Sometimes they do. In not a few cases, the desire for “justice” is not requited so they go on to watch every execution thereafter. Which leads one to wonder why sympathy for the distressed is expressed through killing the killer, and not through providing access to counseling. As anyone can tell from these families’ distress, they need to resolve the loss, not create more ones. Is it beside the point to remember that the condemned has a family that will also become mourners?

But some will charge, “If somebody killed your mother, wouldn’t you want to kill that person.”

That I cannot answer. But that is precisely why we established our justice system: to overcome the moral dissolution inherent in being our own judges. What distinguishes us from, say, ancient Babylon is that we entrust a judge and jury – and do not insist to sit on it.

A passage by Hannah Arendt indicates that sanitizing treatment of murder by the Nazis. The Nazi forces in Romania were so appalled by the Romanians’ bloodcurdling treatment of the Jews that they actually “saved” them just so that they can dispose of them more immaculately themselves.

In Nazi Germany, peculiar boundaries were drawn between hero and villain. So, too, now, when we must devise elaborate justifications for why some should live and others die.

Do we really – like Dr. Mengele – want to decide between the lucky and the unlucky, the weak and strong? Do we really abhor killings so much that we are willing to perform them ourselves, with zeal?

Some will say that the death penalty should be enforced because it acts as a deterrent. However, because study after study has shown no deterrent effect, I suspect that these people really have something else in mind.

The death penalty serves as a way of convincing those who do not need to be convinced that there is a handy trick to making the streets a whole lot safer. To please these people, we might as well stick pins into voodoo dolls, harness people to trees, and throw witches off piers; all of these measures, like capital punishment, would appease the masses and have absolutely no effect on crime. (Also, they would be consistent with the current criminal-justice trend of hurtling us back to the Middle Ages.)

So why not take the money that is wasted on capital punishment and devote it to drug prevention programs which would really free up the overcrowded prisons? Why not donate it to bettering education and policing the communities that are both the targets and sources of crime?

Then, Governor Pataki would have to abandon his triumphant formulation that “I’m for the death penalty” = “I’m tough on crime.” He would surely be called upon by conscionable human beings to explain why he made the sinister equation in the first place.